A visit to the doctor

Home > A visit to the doctor

A visit to the doctor

For some time Kikomeko hadn’t been feeling like himself. There was a numbing pain he felt piercing inside his belly. In spite of the pain Kikomeko whose life was all about work had pushed off visiting his doctor. One reason was he run a company, an insurance outfit, now involved in negotiations for a merger with an outsized competitor. He was so absorbed in this multimillion-dollar negotiation, that he chose to ignore it, hoping the pain would subside.

Apart from being ever lost in work, there was another reason he kept putting off doctor’s visits. Kikomeko had an intense dislike of anything to do with visiting hospitals and taking their medicine. A long time ago as a little child, suffering from typhoid he had been assigned to a closed-off ward, and that experience of being isolated in a sanatorium left him with such a sour test of, “Never again!” Fortunately, now soaring at midlife, his health had generally been super limiting his doctor visit, if ever.

Then one day he felt a lightning pain hit him so hard inside the belly. It felt like a hot spear cutting him to pieces. He noticed the day was open, and so why not make a quick doctor visit, he thought. He called his doctor’s clinic, explained his situation and was booked right away for an appointment. Getting there, he quickly told the nurse he was in a hurry, for there was a lot of work waiting on him and he wanted to see the doctor immediately. Hopefully, he thought, after a quick inquiry, he would be given some tablets, and then he would get back to his desk covered with important paperwork.

“Sir, we need to first take several tests before you see the doctor!” the nurse at the receptionist desk advised.

“For all the important results to come out you will need about two hours!”

Kikomeko pulled out his phone and checked his next appointment. It was five hours away. Inside his backpack briefcase was his laptop and with his iphone in hand, he could as well take the tests, sit and wait, for the results. Then he would fly off with some relief medicine. He obliged.

Once the results came out they were passed on to the doctor. The doctor did not get back to him immediately. When he stepped out of his office he ignored Kikokomeko’s who tried to show him he was delayed by pointing to the wall clock. Instead, he called for another doctor. Kikomeko wondered if there was an urgent case that had come up. But supposing it was his being discussed, a thought crossed his mind. He shifted uneasily.

Finally, the doctor came back and motioned him to enter his office. Kikomeko, gladly walked to his office. He found the other doctor seated and looking quite glum. Kikomeko attempted some light-hearted humor about the weather and how climate change had come to Africa with a recent hard rain pour that had left supposedly some snow behind. But it didn’t have much effect. Then without much ado, his doctor raised his hand, “Our tests strongly suggest that you have cancer of the colon, but we shall need to undertake more tests to prove conclusively.”

“What!” Kikomeko slumped back in his chair. The much he knew of this disease was that it was terminal. Clearly, he had not just dropped by to be read a death sentence. The doctors observing his disturbed face, took to comforting him. “Even if the results come out confirming what we suspect the situation can be managed. There is no need for panic.”

Not panic! Easy to say, but Kikomeko was really terrified. He stood up to leave with the understanding that his results would be sent to an overseas facility for further analysis. “If the results confirm, how long might you give me to live.” He asked while loosening his necktie.

“For these cases, possibly six months!”

Just before all this Kikomeko’s life had but been rosy, glittering, and flying. The company he was just about to acquire would make him the leading insurer of oil and gas in the country, a multimillion-dollar investment. A few months back he had bought land up a hill, and the architecture had just given him 3D drawing of his dream house. But now in a moment all those plans had been rendered meaningless. The magical life he thought he was in full control of, was clearly not his.

When he got home Kikomeko decided not to tell his wife, Mary, for fear of upsetting her and causing tension at home. But then even without venturing Mary could easily notice the anxiety written all over his face. “What must be bothering you?” she probed.

“The company purchase has hit a rock,” he lied and moved outside. A lot was on his mind. Kikomeko had never even written a will, for being in good health, death was the last thing on his mind. He had undertaken a number of bank overdrafts for his various personal businesses which would fall due in a short time. There were issues in the village calling upon him to resolve- land matters left behind by his late father. Being a fighter he knew whatever the results, he would use all his resources to fight this terrible disease, including perhaps selling some of his property. But then he also needed to leave as much means behind for his family, just in case the disease was not arrested and it took him in the six months!

Eventually, he decided to come clean and share with Mary what was eating him all up. At night he kept tossing in bed, shivering with sweat. However, far from what he had feared, Mary on hearing told him she already knew. “Matter of fact I had a dream that the enemy was attacking us and all we need is to pray.”

Kikomeko normally considered his wife one of those religious fanatics, and would never cease to shake his head, as she kept linking every aspect of their life to God and prayer. He often mocked her, “Why to keep your God on 24/7 watch with all those frantic prayers like he has no other business!” But then, this time, something in all she said struck him, and unlike in the past, the two joined hands in prayer.

A week after Kikokomeko was called back by his doctor for the final results. He drove over sweating, fearing the worst. But when he got to the clinic, the doctor was smiling with relief. “I have some good news,” he shared. “We have just got a report from overseas and it is an ulcer bothering you and causing all this pain. It is not the cancer we feared.”

Delighted, Kikomeko called up Mary and shared the good news. “Hallelujah!” she cried with joy. “Amen!” Kikomeko roared back.

As he drove back home he reflected on this recent experience. Before all, he had been preoccupied with his work, thinking everything was under his control. He had not even had time for his family. Then in one moment, his life had been tossed upside down with a devastating medical report.

What a relief that it had all worked out fine. But for now he knew something. He needed to change the priorities of his life. Instead of work and work; it would now be God, family, and then work. Kikomeko felt like a man given another chance at life. Whatever he would be doing now was the knowledge,that he was not fully controlled. There was someone else! 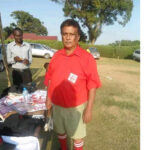