Christopher Sembuya (1935 – 2022): The Story Of A Visionary African Industrialist Ignored By His Own Government

Home > Christopher Sembuya (1935 – 2022): The Story Of A Visionary African Industrialist Ignored By His Own Government

Christopher Sembuya (1935 – 2022): The Story Of A Visionary African Industrialist Ignored By His Own Government

Mr Christopher  Sembuya, the co-founder  of  Sembule Steel  Mills, once one of the  leading  industrial conglomerates in  Uganda, that threatened to become the Samsung  of  Africa except  for lack  of imagination on our economic  planners, as  I will  explain,  led a life that  was heroic but also  tragic.  It  was  heroic that coming  from  humble beginnings  he at midlife helped found a family business that  manufactured  sophisticated electronic household  goods which  became a  source of pride  to Ugandans. Tragic  that  when the business run through financial difficulty due to  bad debts it  was ignored  by  the government which  it  had once supported  to  come to power  in spite of  passionate  appeals.

When Sembuya passed away this week at 87, he would not be feted as pioneering industrial  giant in the  manner  of some.  In fact, at  some point, after losing  his business and  most  of  his property, he  had bitterly  cried out to a deaf  government  to honor him too  as a  national hero,  with just  a heroes medal. In  death  Sembuya  except  for  the Buganda Kingdom  government, represented  by once  his  former employee,  ex Kattikiro  Mulwanya  Ssemwogerere, some  others  did  not show  up to laud him as  a  great  pioneer  of  African  business, as should be.  And yet there is so much that  he gifted the nation of  Uganda and  did to  the  pride of Africans.

Sembuya was born into a well renowned entrepreneurial family from Bukunju, in Kyagwe province of Buganda.  His father, Yafesi  Magula, was a successful cocoa farmer. After attending  St Leo’s  secondary  school, Kyegobe in  Toro, he started a government  career  that  saw  him rise  through  the ranks to the  position  of  Assistant District  Commissioner in the Ministry  of  Local  government  for Moyo  and  later Karamoja Districts. At  some  point   he moved to the Ministry of Finance, where he served as Senior Finance  Officer  and then Principal  Finance officer.

In 1972 this career civil servant took the unusual decision  to leave a stable government  job and plunge into  the uncertain waters of  an  entrepreneur   career. “I owe everything to my father the late Yafesi Mugula,”  he  shared  in one interview with  New Vision, the government  owned paper. “He told me as long  as  I worked in  government  I would  never  get  richer, not even reach him. That haunted me. I was Undersecretary then at Ministry of Finance and they were preparing me  to become Permanent  Secretary. I resigned from the government job.”

Sembuya  had a younger  brother, Henry  Buwule,  who was  already  in business. Buwule  had set  up  a  shop  in  Ndebba,  in 1964,  close  to  Katwe, where most of African owned business were based at  a  time  when  businesses were dominated by  Asians. The shop dealt in hardware products. After  joining  his  brother  they  decided to  go  into nail   production. Borrowing  from  their  two  names  they  started Sembule industries which as it expanded in  1974  became Sembule  Steel  Mills.

The company grew relatively fast. “In a few years,” reads a message from the company website, “ it had grown into one of the largest wire-nail manufacturing companies in Uganda. Throughout the 1970s and 1980s the company continued to grow and increase its product lines from wire nails to welding electrodes…” The company would go on to produce Roofing sheets, Welded Wire Mesh, Round Iron Bars, Galvanized Barbed Wire, Steel Pipes and multiple hardware products. Along the way also employed thousands. When I left  university in  1987  a number  of  my  colleagues, like  Godwin Kihuguru (RIP) joined Sembule Mills  and  I  must say I felt  a  bit envious.

Diversification is a business strategy advised on the simple premise that it is better to have your eggs spread out than have them all lay all  in one  basket. Companies  that are thriving  normally  use their healthy cash flows to diversify  into  new fast  growing  markets, so as to  lessen the  risks of  depending  on a limited and perhaps diminishing  market. Given her business growth it was only natural for Sembule  Mills to enter into  new growth lines  of  business. “In 1985, a small deposit-taking private company was started,” recalled the Observer  newspaper. “In 1991, it was granted a banking license as Sembule Investment Bank, and a fully-fledged commercial bank in 1996. A year later, after securing new investors for the bank, it was renamed Allied Bank International, which later became today’s Bank of Africa Uganda. At the end of the 1990s, Sembuya started Pan World Insurance Company.” This later became Lions  Assurance, one of the  leading   insurance  company  in Uganda today.

Sembule Mills did not stop with diversifying in the financial markets but using her manufacturing knowledge now veered  into the world of  electronics.  By the mid-1980s, the group had diversified into electronics, including the production of street-lighting systems and the first Ugandan-made transistor radio, the Sembule radio, which came in brands like “Makula”. The company drawing  on local engineers and workmanship went  into assembling TV sets, bulbs, desk  telephones,  traffic  lights and even computers.  Sembule revolutionized the Ugandan airwave by introducing FM technology. In 1992, she established the first private TV channel, Cable International Television. Who is that who was not aware of  all these  developments then  and couldn’t  be proud!

Unfortunately  as the  company  expanded tragedy  occurred  when  Henry  Buwule  passed on in the mid 1980s This loss would  affect  the company  as it  had been  up until then a successful and productive partnership. The woes of   Sembule cannot be traced to mismanagement as their  history of  rapid expansion  shows expertise but  started when they took on expensive financing  for some of their diversified projects. After  securing  a loan from  several financial  institutions  the  company  failed to service it adequately and the  lenders  sought to auction her property. Faced  with  the  threat of  losing  his business  empire, now at an advanced age in his late  seventies, Sembuya, who  passionately  believed  in the capacity  of Africans to  run successful industries  as he  had already  proved  himself , went  out of the way  to directly  appeal  to  government  of  Uganda to bail him  out. “I appeal to the government of Uganda to help  us with this  situation,” he cried out  in an interview  that can be found on Yutube. “The company we  have  built  is one   of the  largest managed  by Africans in East   Africa.”

In the history  of industrialization  in Japan and  South  East  Asia we know that their iconic industries like  Samsung  and  Toyota which  are  now  major global household  brands grew not solely  on the  abilities of  their  founders but  also due  to the  cooperative  efforts  of their  nationalist  government. It  is well documented  that  family  founded firms  like Samsumg, Hyundai, LG, collectively  known as chaebols,  were backed by  their  government.  For  example, Samsung  was  founded in 1938  by  Lee Byung Chill as  a grocery store but heavily  relied on government  protectionist policies. Samsung would  move into  finance and  other  major  industries, the  most  recent  being cell phone  and  pharmaceuticals, which  I have visited. Today, we know in China, too, companies like  the  family  founded Huawei, and  all these “CCCC” construction firms, have prospered  because of  government  tacit  support.

Unfortunately, this truth  was not  shared  by Uganda’s leadership, and  Sembule Mills, an indigenous founded  company  that gave us radio  and color TV sets  bearing  our African names was left to die an ignominious  death. The man who once helped  fund  the  war that  brought the  present  government to power now  resorted to  write  over  200  letters to  President  Meseveni appealing  for salvage. While  the  President who once used  to cite Sembule as a case  study of his economic recovery  miracle  can be  excused, the  same  cannot  be said of   planners   at  the  Ministry  of Finance  where  once  Sembuya worked.  Had Sembule  been  rescued there is all the  possibility  that she besides producing computers she would now have entered  the  lucrative cell  phone manufacturing sector and car manufacturing, which  Uganda  is  lately attempting at  Kira motors.

Bailing out stressed but  promising  companies is  not  unique. In 1980 one  of the top three  car  manufacturers  in the US, Chrysler  Motors, was rescued from  bankruptcy  when  the  government  bailed it out with  nearly $1.5  billion dollars  in  loan  guarantees.  In 2008  the  US government  again  injected  over  $700 billion  in key  financial  institutions like  JP Morgan, Goldman  Sachs, Citgroup stressed by  the  financial  meltdown. Had  the  US government  merely stood  on the side  their  collapse would  have resulted into a catastrophic  and systematic collapse of  the US financial  industry, leading to millions of jobs lost.

In fact, there are many other  business in  Uganda that  have benefited  from government  bailout, as  well. The  revival  of  the Madvhani  Group in the  1980s was not solely  based on the  abilities  of the returning family members but  because of a financial  capitalization from  World  Bank  and  other  financial institutions, backed  by Government  of  Uganda. “The government has helped many people including Sudhir (Ruparelia) and Hassan (Basajjabalaba), I don’t know why they have not helped Sembule,” once moaned one of Sembuya’s son in a  press interview. For while it  is true  that the collapse of  Sembule  Mills  was not to result  into a “too  big too fail”  economic   collapse of  the Ugandan economy,  when one  considers  that  hundreds of  Ugandans  today board  planes every day  to go out  to scavenge for jobs  in the  Middle  East, then how could  we  let  such  a proven  industrial conglomerate collapse! Someone needs   to answer!

In his business  career Sembuya helped to mentor many leading business  personalities like  Mr  Emmanuel  Katongole  of  Quality  Chemicals, who once  worked  under  him. One  of his  mentees,  Engineer  Fred Mubiru, in  a  Facebook post,  soon after  his demise, recalled  how  after Sembule  Mills had executed  successfully  a  street  lighting  contract  which he had overseen as KCC infrastructure  engineer, he  urged him  to  quit  government  and  enter the private  sector, which  he  eventually  did   after a lot  of  pushing  from him. “That decision was one of the game changers of  my  life…I gained freedom and  control  of  my life.”

Sembuya  was a passionate  believer  in African  run business and he  wrote  a small book, “The  other  side  of  Amin  Dada!” In it he noted Amin emancipated and supported African businessmen  like  him start industries.  It “pained” him ( his words)  that part of his  business empire  was sold  to  Asians, which  is  the  very  Economic  war  African industrialists  had embraced. “What the Asians and Europeans can do, Ugandan investors can do,” he  wrote. “Ugandans should therefore be given first  priority  and probably  full  support  thereafter. Government  should  protect  the local  firms  from the  big ones  that come  in with plenty of foreign  money  and end swallowing  home grown initiative.  This way the country will see many of its nationals succeeding.”

Early last year Christopher Sembuya was pictured being recognized by Bank  of Africa, which he helped  found.  He looked fail.  On Tuesday, January 11, while sitting on the sofa at his Windsor Crescent home in Kololo, his wife Ritah shared, he collapsed. He was rushed to nearby Kampala Hospital in Kololo, but unfortunately, he died at around midday. May he RIP! 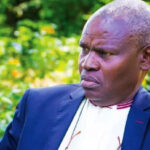 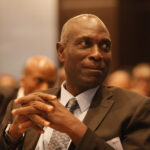 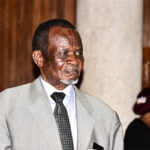 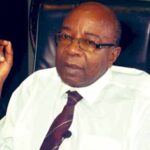