“The problem with you is you forgive too much!” Ataseka loved to remind her husband, Kasana who had an irritating habit of passing slights, believing forging and maintaining relationships was far more important than holding on to grudges. “Life is long and no need to hold on to petty slights.” This was one of Kasana’s favorite sayings.

Ataseka would have none of that. There was one particular incident that really irked her.
Kasana had applied for an executive job of a newly created government agency. If they got that job there was no doubt it would improve the family fortunes. So eager was he for this job that Kasana took effort to inquire about the recruitment process. The news he got was comforting. On the interview panel would sit an Assistant commissioner from his ministry, a man he had himself recruited. “At least I have a vote in hand,” he thought to himself.

After the interview, Kasana waited anxiously for his appointment, quite assured he had done well. To his shock, another candidate was appointed to the job. Eager to know what happened he used his inside networks to find what had gone wrong. And that is when he discovered that the Assistant Commissioner he was dependent on had actually voted against him.

After the news had sunk in, he shared it with Ateseka. She vowed never to forgive
“that man and any members of his family. I recall how he was unemployed and you took him to the ministry,” she reminded Kasana. “And here he was the one speaking against you. I will never speak to that man again!”

In her life, Ataseka lived with a maxim of a scorched earth if she run into anyone who ever slighted her. At the National referral hospital where she worked as a nursing supervisor all the nurses and junior staff under her lived in terror of ever getting on the wrong side of her. She would not hesitate to put one on ‘katebe’, for daring showing the slightest disrespect.

One day came this particular nurse, Onsanze, who started boasting having a nursing degree unlike Ataseka who as an enrolled nurse. In meetings, Onsanze would making alternative suggestions countering her proposals. As it was in her powers, Ataseka had had her re assigned to a dead-end shift, past midnight, one where she was denied of any serious work. “That is what you do with a smart aleck!”

Now, time came when Kasana and Ataseka retired from their formal jobs. Soon, a son of theirs graduated and started looking for a job. Then Kasana reached out to his old networks. He found that his old Assistant Commissioner had eventually taken up the job he once coveted. Kasana decided to approach him. “I have my boy just out of school and can you find him something to do here?”

The Assistant Commissioner had long been torn with guilt over what he had done to Kasana. What made him feel even worse is that Kasana had chosen not to retaliate, going ahead to leave behind a positive recommendation that had catapulted him into this agency, one of the best payers in the country. He also recalled how Kasana had once been of help to him in his struggle to secure employment at the start of his career. Quickly, he called in the Human Resource Director. “I want you to find something for this young man immediately.”

Kasansa left beaming with some satisfaction. “I am glad I left the doors open,” he reported back to Ataseka.

Out of a job, Ataseka continually suffered poor health. Whenever she visited any clinic they would refer her to the National referral hospital where she had once worked. “Those are the ones with expertise to handle your situation!” But Ataseka hesitated going back to her old work station. As a nursing supervisor she had left a trail of enemies and feared now finding herself dependent on those she used to harass.

However, her condition continued to worsen. Late one night, as she struggled for life, Kasana had to call for an Ambulance. There was no other place to take her but the National referral hospital.

Admitted, in the morning when Ataseka opened her eyes, there was Osanze standing erect and gazing at her, along with a troupe of other nurses, she used to work with. Ataseka closed her eyes. She wanted to bolt out of the hospital, but there she was, and in her weak statre, all she could do was to pray for the good graces of those she had once terrorized.

Taking a long view of life means that in human relations there are certain fights which you let go, and appear even a loser at the time, simply because you really have no idea who in the very end will be in the driver’s seat. Slights are ignored not because they do not bite but simply that the big picture matters more. 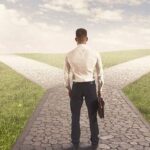